Help Gonzo discover the land of Gold and reward yourself. Gonzo’s Quest Slot by Netent will take you on a seafaring adventure with Gonzo on his quest for the land of Eldorado. For those who may not know, Eldorado is the city made of Gold, so legend says, full of hidden treasure. Help Gonzo help you land some extra coins by playing. You’ll grow to love gonzo who is a rather popular Netent icon these days, and we love how this slot tells more of a story than just plain spinning.

How to Play Gonzo’s Quest 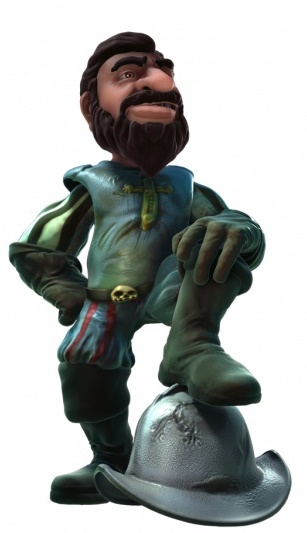 Gonzo’s Quest Slot has great animations and fitting sound effects when you spin the reels.

Load the game and get acquainted with the rules and game instructions, if you need to. You’ll notice that you’ll find yourself in an Aztec jungle with big stone like boulders with inscriptions on them which form the reels. Gonzo’s Quest has 5 reels, 3 rows and up to 20 pay lines.

Set up Gonzo’s to the bet levels you feel comfortable playing with. Gonzo’s Quest has different coin levels from 1 cent to 50 cents. To work out what minimum bet or maximum bet you can make whilst playing Gonzo’s Quest, here’s a brief guide:

Gonzos Quest has some decent extra features, specifically the groundbreaking NetEnt feature called Avalanche Feature (which we will explain below), the Freefalls (very unique!) and Joker Wild Symbols.

Avalanche Feature: The Avalanche feature is called so because of the way this slot is designed. Gonzo’s Quest doesn’t feature ‘spinning reels’ but rather falling blocks that make up the ‘reels’. When you spin, the blocks, which feature the regular icons you’d see on regular reels, fall into the space below, and feature no such spinning.

When you hit a winning bet line, an Avalanche will start. If you have symbols which fall in a winning combination, these will burst and disappear, causing a new symbol avalanche to occur, which will give you even more chances to win. Every avalanche you get raises the win multiplier function until the maximum is reached. During the main game, the maximum multiplier you can achieve is 5, and during the Free Falls (read below) it’s 15.

Free Fall Feature: These are Gonzo’s version of Freespins, yet since the slot is designed a bit different, the reels fall. You can activate the Free Fall feature by getting 3 or more Free Fall symbols. They should appear in a row and start on the first reel. During Free Falls round, the equal bet is used that was used in the round which the Free falls were triggered. You can win more Free falls in the free falls round as well.

More so, if you manage to get a winning bet line during the Free Fall, the Avalanche feature is activated, and every Avalanche raises the win multiplier to a maximum of 15, so there are big win possibilities when you play Gonzo's Quest.

Wild Symbols: These symbols can replace other symbols enabling you to win more from bet lines. 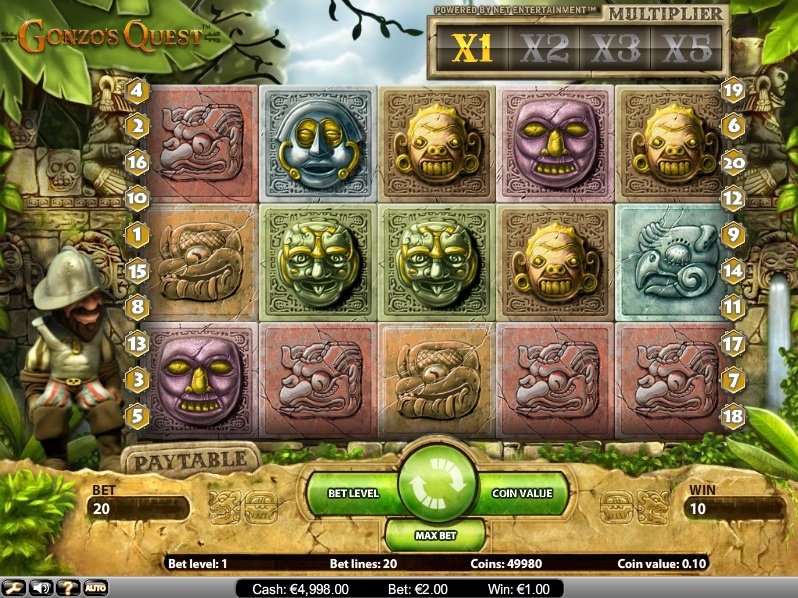 Gonzo’s Quest can be enjoyed on all mobile phones and tablet form. Netent’s Gonzo’s Quest Touch is as good looking and if not better than the desktop version is it fits to the screen like a glove.

Gonzo’s Quest could be the most popular slot of all time that NetEnts released to date, with Starburst or Twin Spin Slot thereafter. This is probably due to the fact that the slot is different (Avalanche features) and also due to the fact that it tells a story. It’s engaging and Gonzo is super cute as well, especially when you win and he pops up to collect all of your coins/winnings in his hat.

That aside, Players who like to win frequently but smaller amounts (med to low volatility slot) will really enjoy this slot. For high rollers then perhaps it may get frustrating to get smaller wins more often that large adrenaline rushing wins. But that’s your call. It's always worth trying it out for the adventure alone.